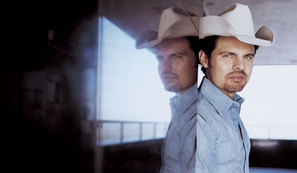 Rick Trevino was born May 16, 1971, in Austin, Texas. This country artist is a Mexican-American who sings in both English and Spanish. Trevino was born into a musical family -- his father was a member of a local Tejano group. Both of his parents fostered his musical interests, and as a child, he listened to a variety of music, including Tejano, country, classical pianist Van Cliburn, and mainstream pop/rockers like Elton John and Billy Joel. Soon, he was taking classical piano lessons and studying the clarinet. After graduating from high school, he was offered a baseball scholarship to Memphis State University, but he declined the offer to study music.

His first single was released in English as "Just Enough Rope" and in Spanish as "Bastante Cordon", with a bilingual version also available. Similarly, his first album, Just Enough Rope, was also available in Spanish as Dos Mundos. He moved to Columbia Records where the producer Steve Buckingham encouraged him into the mainstream of 90s country music with a strong element of 60s honky tonk.

Trevino's second album included the catchy "Bobbie Ann Mason", a US country hit single. He always includes Spanish material in his act and has said: "People love it as Spanish is such a romantic language." Learning As You Go was his major commercial breakthrough in 1996. Learning as You Go, Trevino's third album, was released in 1996; Changing in Your Eyes followed two years later, and Mi Son was released in spring 2001.

For his next album, In My Dreams, Trevino wanted to do a country record that had a Latin flavor to it. He wrote or co-wrote every song on the album except for the final track, a cover of the Bryan Adams song "Have You Ever Really Loved a Woman?" The title track, "In My Dreams" became a single and remained on the charts for twenty weeks.