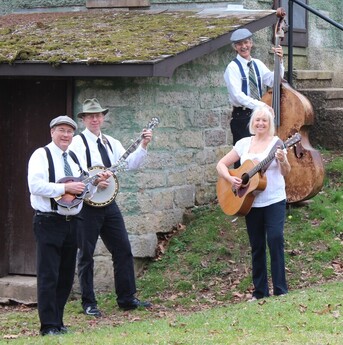 Dixie Union is an award-winning bluegrass band that was originally formed in 1998 to provide a unique blend of traditional and innovative bluegrass and gospel, with sojourns into blues, ballads, country, Irish, western, boogie, and even an occasional polka!

Dixie Union performs at a variety of venues such as bluegrass festivals, state parks, benefits, association annual meetings, fairs, microbreweries, wineries, church events, trail rides, picnics, reunions, parties, on radio, and has been designated as a “Legends” band at the Missouri State Fair, where the band has performed many times. The group has produced five CD’s, one of which was featured in the national publication “SPBGMA Newsletter”. The most recent CD’s are digitally distributed by iTunes, Amazon, Spotify, YouTube, Pandora, and CD Baby. More information can be found on www.facebook.com/dixieunion.

The band has opened for or shared the stage with such groups as the Nitty Gritty Dirt Band, Ralph Stanley, Kenny & Amanda Smith, and the Chapmans. Their music is influenced by artists ranging from Bill Monroe and Jim & Jesse McReynolds to Hot Rize and Leftover Salmon.

The Richardsons’ fresh spin on interpretation, shaded by Francis’ traditional grounding and Price’s driving bass, gives the group a sound unique in the bluegrass world. Known for their two, three, and four part harmonies, blend of old and new, and zany on-stage antics, Dixie Union promises to entertain bluegrass fans of all ages.